Well, so much for the warm weather and sunny skies.  Monday was cool (cold by local standards) with fairly consistent winds up to 20 mph.  We still saw a lot of people walking around the French Quarter in shorts and flimsy tops.  Marilyn couldn't understand how they could not feel the cold.  I pointed out that I didn't think they were feeling much of anything!  "Oh, of course" she replied.  We spent the day in he French Quarter and Riverside Park where the Lundi Gras celebration was under way.

We found a parking structure for the day without much trouble and at a reasonable price.  All those warnings about parking etc. seem to be overblown.  After a visit to the Visitors' Bureau, we set off for a walking tour of the French Quarter.  This was late morning so things were fairly normal.  After meeting Marilyn's new friend (shown at left), we spent sometime in Jackson Square outside St. Louis Cathedral.  Not surprisingly, the church was secured so we will wait for another day to see the interior.  There was plenty going on outside to keep our attention.
We had a delicious lunch at The Gumbo Shop in the courtyard.  It was would been a lovely venue on a seasonal day but even though they had the heaters on, I could see my breath and used my coffee cup to warm my hands! 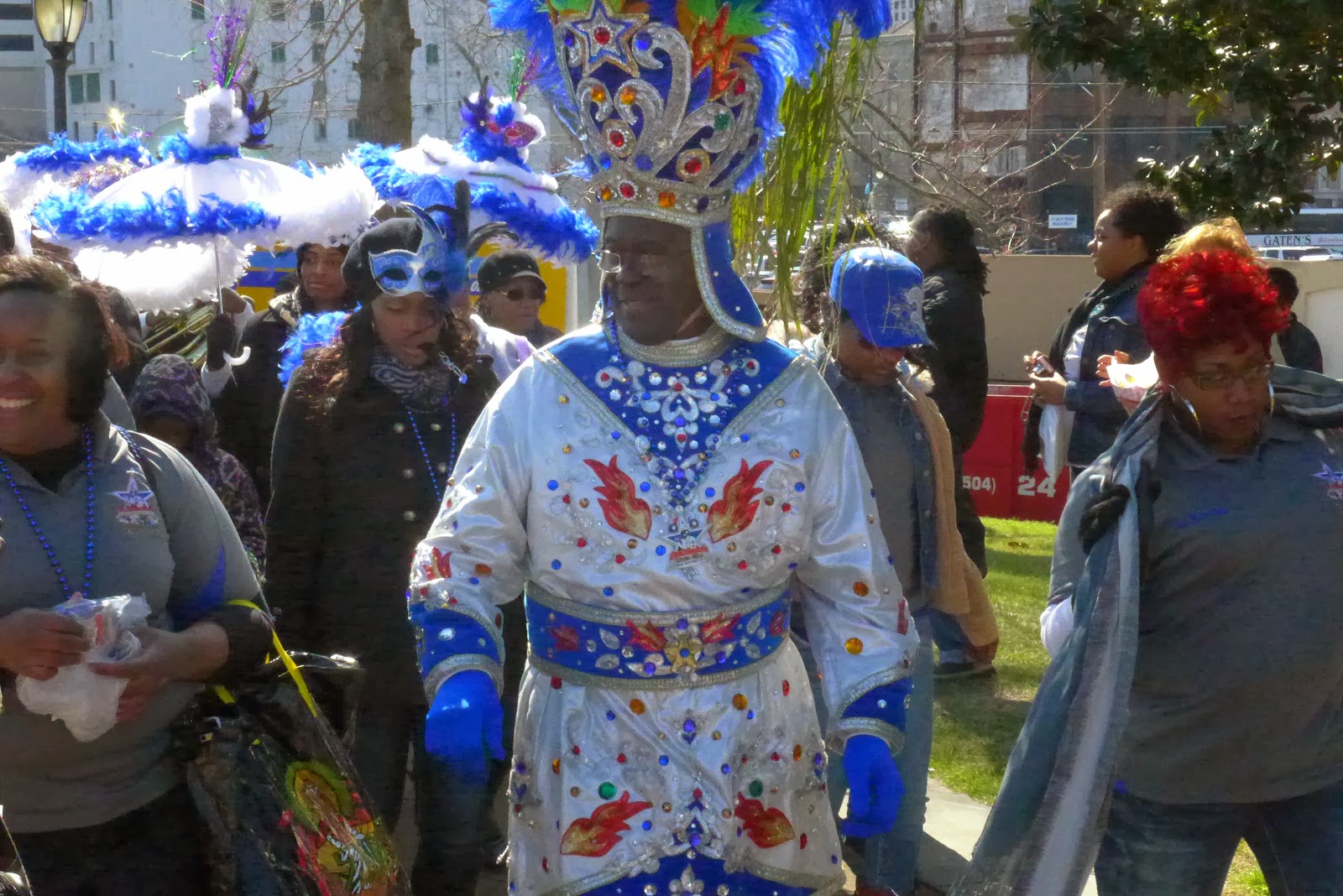 We decided to spend the afternoon at the Lundi Gras (Fat Monday) in Riverside Park.  This is put on by the Krewe of Zulu.  There was plenty of good music and colorful characters.  The group to left just randomly showed up and paraded around the park grounds in the midst of all the music performances and the food tents.  We stayed as long as we could and then sought some rest in a food court with nice restrooms.  It is one of the realities of traveling as a senior that one is always aware of the location, cleanliness and accessibility of restrooms.  Yesterday we saw the local Convent of the Sacred Heart was providing access to clean portapotties for a $10 all day pass.  There is always a market opportunity! 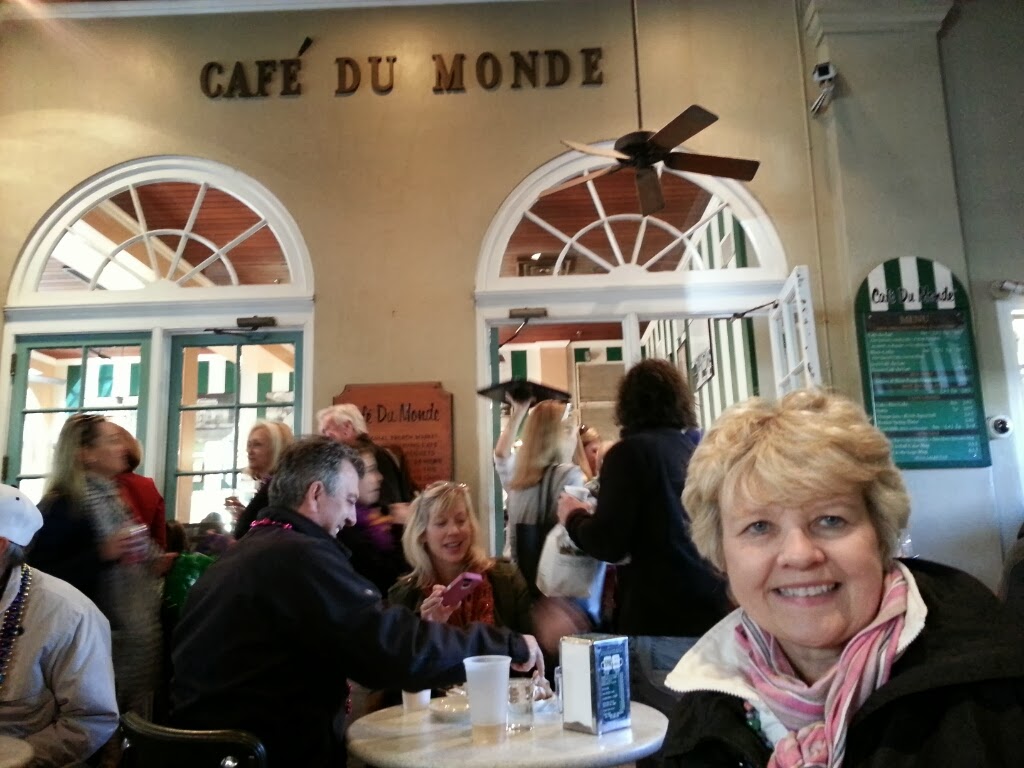 We found our way to Cafe du Mode and enjoyed cafe au lait and beignets.  We then decided to make our way back to the car and call it a day.  We passed by St. Louis again and I got some nice setting sun shots from the north side of the park. 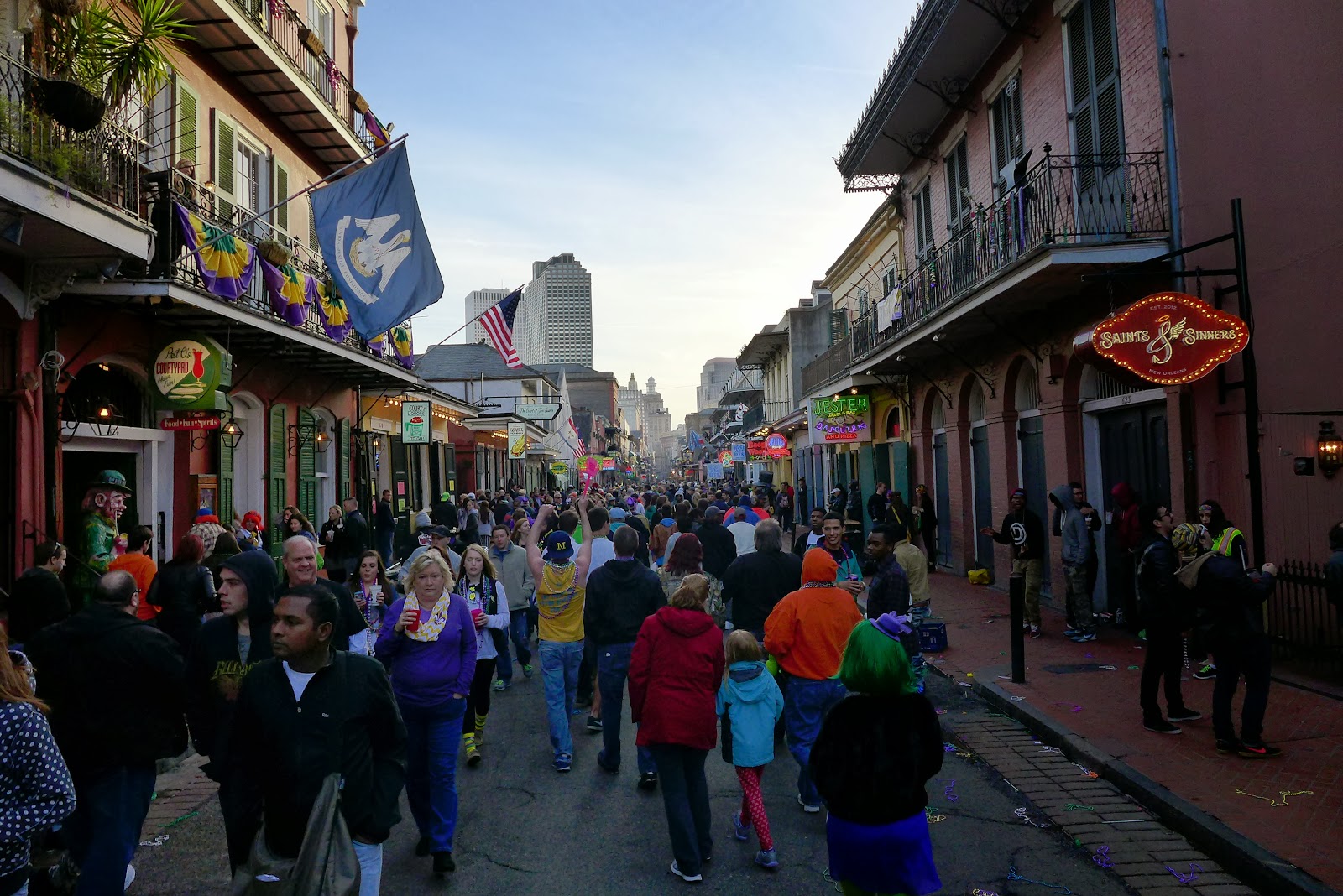 Once we got out to Canal, it looked like people setting up for one of the evening parades.  Since we were only a couple of blocks from our car, we decided to hang around and see another parade.  As the sun set, it got colder and when we learned that it would be at least another hour before it got to our location, we decided to bag it and head back to Metairie and our hotel.  We did meet a young man, Jasper, who was visiting the US from Norway.  His English was excellent.  He was "couch surfing" during his stay.  Unfrotunately, I forgot to take his picture.

The evening ended with a adventurous dinner at Semolina where I had a double cheese burger pasta.  Interesting, inventive and delicious.

You can view the photos from this day at a separate album by clicking here.
Posted by Bill Pickett at 5:25 AM